Why and How to Build a Diverse Nonprofit Board

The call for nonprofits to embrace diversity and reflect the communities they serve is growing louder. To accomplish those goals, charities and foundations need diverse board members, says Danielle Johnson-Vermenton, principal consultant at Blackbaud.

“It has to start at the leadership level,” she says.

That’s because boards make and enforce the policies that govern charitable organizations. Only a board whose members have diverse experiences and perspectives will be able to effectively run a nonprofit that hires, serves, and raises money from diverse people, experts say.

We are unable to fully display the content of this page.

The most likely cause of this is a content blocker on your computer or network. Please make sure your computer, VPN, or network allows javascript and allows content to be delivered from v144.philanthropy.com and chronicle.blueconic.net.

The call for nonprofits to embrace diversity and reflect the communities they serve is growing louder. To accomplish those goals, charities and foundations need diverse board members, says Danielle Johnson-Vermenton, principal consultant at Blackbaud.

“It has to start at the leadership level,” she says.

That’s because boards make and enforce the policies that govern charitable organizations. Only a board whose members have diverse experiences and perspectives will be able to effectively run a nonprofit that hires, serves, and raises money from diverse people, experts say.

Philanthropy leaders point out there is both a “business imperative as well as a moral imperative” to make boards at charities and foundations diverse, inclusive, and equitable.

“People who have a different way of looking at problems and solving them” strengthen an organization, says Virgil Roberts, co-founder and chairman of the board of the African American Board Leadership Institute.

In contrast, nonprofits with homogenous boards may lack leaders with the ability to see — and the courage to declare — when “the emperor has no clothes,” Mr. Roberts says.

To encourage nonprofits to step up their efforts to diversify, some grant makers, like the Z. Smith Reynolds Foundation, require grantees to provide information about how they are building diversity into their boards. And organizations that gather data on charities, such as Guidestar, have begun asking nonprofits for that information, too.

Yet in 2014, only 20 percent of nonprofit board members were people of color, and a full quarter of boards are staffed exclusively by white people, according to BoardSource, a nonprofit that conducts research and offers programs to strengthen boards. That means charities have a long way to go before their governing bodies are meaningfully diverse.

Here’s guidance on how to start making your board more diverse.

It’s important for nonprofits to understand that appropriate board diversity depends on context. It doesn’t mean simply balancing the gender or race ratio of members; it requires thoughtfully assembling a team that reflects the community you serve. A human services organization in Miami — which has a majority Hispanic population — should have a different board makeup than one in the middle of Utah, Ms. Johnson-Vermenton says.

For example, most of the board members of the Consumer Health Foundation, based in Washington, D.C., are people of color. That’s because the leadership reflects the demographics of the region and the diverse communities the institution tries to serve, says its president, Yanique Redwood.

One way to determine what kind of diversity is appropriate for your board is to analyze demographic information using websites like those for the U.S. Census (census.gov) and Data USA (datausa.io). Another is to seek training from an external consultant. Or draw on a community member who can facilitate conversations among board members about issues related to diversity.

It’s Not All About Money

Some charity leaders may worry that courting diverse board members will reduce the board’s fundraising capacity. That line of thinking is a “convenient excuse” to avoid seeking different kinds of people “based on a stereotypical view” of the financial capacity of minority groups, Mr. Roberts says.

He points out that African Americans, whom his institute works to place on nonprofit boards, have a long history of giving generously to churches and to their family members.

Indeed, nonprofits that overlook minority candidates for the board do so to their financial detriment, Ms. Johnson-Vermenton says. She tells a story about an African American fundraiser who secured big gifts for a nonprofit from new African American donors. When the fundraiser asked why the donors had never given before, they responded, “No one’s ever asked.”

But nonprofits should not recruit board members based only on their ability to give or raise money, Mr. Roberts says: “There are ways in which people can be of great value to an organization” that go well beyond their checkbooks.

At Cornerstone Theater Company in Los Angeles, 20 percent of board seats go to “community board members” who are there to keep decision making grounded in the realities of the community, board member Paula Ely told the James Irvine Foundation.

The board of the Consumer Health Foundation decided to recruit members from diverse socioeconomic backgrounds in order to find people “who are working very directly with people who are suffering the most in our community,” Ms. Redwood says.

It now has a member who works for the National Institutes of Health and lives in an apartment building with many immigrant families.

“Her perspective on the board is vital because she’s living and working in a very grassroots way with communities,” Ms. Redwood says. “She has direct living experience with people who are trying to find housing in a city where the cost of living is rising.”

To balance the need to raise money and the need to find board members who are in touch with the community, Mr. Roberts recommends instituting a policy that simply asks members to donate an amount that is personally significant.

Making a board more diverse may require members to change their typical recruiting practices. Without purposeful intervention, boards tend to “regenerate,” in that members often are replaced with people just like them, Mr. Roberts says.

“People aren’t necessarily willing to go way outside of their comfort zone to find people they don’t know in places they don’t live,” he says.

His institute aims to help boards find African American members whose skills and interests match their needs. Other good ways to recruit diverse members include posting board openings online and in community spaces, contacting professional associations, and searching via networks like LinkedIn.

Experts recommend codifying diversity policies into nonprofit and foundation bylaws to ensure they remain priorities regardless of who sits on the board at any given time.

For example, the Consumer Health Foundation created a list of diversity goals that its leaders use during annual planning meetings. It also uses a matrix (available for download below) to measure whether its board meets its diversity standards.

Some recommended policies to include:

These recommendations come from Mr. Roberts, nonprofit researcher Christopher Corbett, and a report by the James Irvin Foundation.

Nonprofits and foundations may also want to hold themselves publicly accountable for increasing the diversity of their boards. The Consumer Health Foundation posts its board composition information on its website: 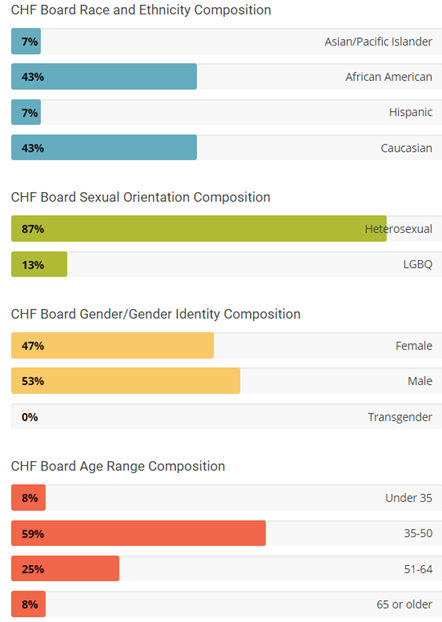 Being Open to Change

It’s important to remember that the point of diversifying a board is to cultivate positive change that can help a nonprofit or foundation better accomplish its mission.

After recruiting diverse members, boards must be prepared to listen and incorporate new ideas into their work, rather than expecting new members to “assimilate into what you already have,” Mildred García, board member at the Pacific Symphony, told the James Irvin Foundation.

It may be uncomfortable at first, but boards must be open to critiques, Mr. Roberts says: “In order to change the culture of an organization, you almost need to have somebody highlight what the board is doing wrong.”

ADVERTISEMENT
Read other items in this Chronicle Review Shows ‘Coastal Elites’ Dominate Biggest Foundations' Boards package.
We welcome your thoughts and questions about this article. Please email the editors or submit a letter for publication.
Executive LeadershipWork and Careers
ADVERTISEMENT
ADVERTISEMENT